No. Nope. No thanks. I can’t do that. I can’t commit to that. Naaaaah. That’s not gonna’ work for me. Thanks, but no thanks. I’ll pass. Just no.

Do we really have to say yes to everything? I think saying yes is important. Saying YES to challenges, saying YES to new experiences, being willing to try new things, leaning into things that are hard, accepting a new project, learning a new skill….all those things should definitely have a default setting of YES as much as possible even when it’s uncomfortable or really hard. Those things are about growth and development and evolving as a person.

I saw that last year there was a particular writer for TV shows, can’t remember her name right now, but she said she was in her “year of yes” – meaning that she would say yes to nearly any and all things coming her way. But I also understand that was because she was saying no a lot to life. And she needed a change. I think that’s both different and the same thing that I’m talking about. Maybe saying yes OR no too much is really what I’m thinking about. The extremes, and finding more of a place of balance where you say yes when you mean it…..and say no when you mean it. 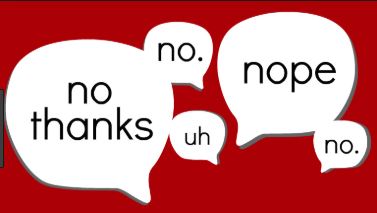 This week I’ve had to say a few really difficult NO’s. I am sure I’m making the right choices around all three situations. They all involve situations where I feel like I wasn’t being valued or respected, or that there wasn’t a way to come to agreement on a middle ground. Saying yes and leaning into things that are hard is one thing; saying no when you are certain it’s the right answer gives you power, and it lets others know that they can’t take advantage of you. I feel good about being able to say no this week. Even though I can make a list of reasons for my “no” in each situation, should I really have to?? Do men (or other women) feel they must justify their answer when it’s NO?? Sometimes it’s just an emotional, gut level thing and you can’t provide a bulleted list of reasons…it’s just a 6th sense type of response that you can’t necessarily put into words.

Being able to say no and be ok with that is really difficult. I keep thinking what if….what if I said yes?  And at the same time, I am 100% sure that I made the right choices in all three circumstances. But damn, it’s hard to let go of all the extra crap that comes with saying no. That’s what growth looks like – right? Knowing your worth and value, not settling for something or somone in your life that will devalue your time, energy, or enthusiasm.

Cheers to all of you who can say no and yes when you mean it! Let’s all keep the bar high. Expect more of ourself and others by setting limits, keeping the good, and pushing away the bad.