nce was longer but not impossible for me. I knew that going into it. But I didn’t count on some other thing that I hadn’t encountered at other events before. The scope of this event was huge in comparison to others I’ve done. Most of the early morning prep was literally in the dark and a little confusing to know where everything was. This pic to the right is of a cruise ship way off in the distance. It’s about 6:45am in this pic, sun’s just coming up, and it looks like a lake- thank god.

The day prior I had gone to the swim clinic and had a chance to swim in the water, mostly to see if I needed a wetsuit. The water was 78, which isn’t cold, but it is when you try to put your face in it. I had also driven the bike course in Miami traffic, which is enough to scare the shit out of anyone!

Saturday swim clinic, for about 150 people

The size of this was HUGE. There were 2300 participants, the transition area was a full city block size, and there were more rules & regs than other smaller events I’ve been in. You were required to check in the day before and leave your bike in transition overnight. That felt weird, but that’s how the bigger ones do it. So, after the swim clinic & check in, it’s time to “relax”…yeah right.

This picture makes me laugh! I’m standing there looking around thinking to myself, WHY DO I DO THIS? THIS WAS A BAD IDEA! Too late now. 3, 2, 1…go! And it officially starts. The swim was tough to get started, it’s always hard to find the right pace. But the water was clear and beautiful. Perfect temperature. No seaweed, no creatures, I could see everyone around me. It felt safe. The ocean floor was stunning and beautiful, almost distracting at times. Really beautiful. I remembered some advice to think about the swim as the warm up, don’t go all out then because you still have the rest. Really good advice. 21 minutes for half mile in the ocean, I’ll take it. 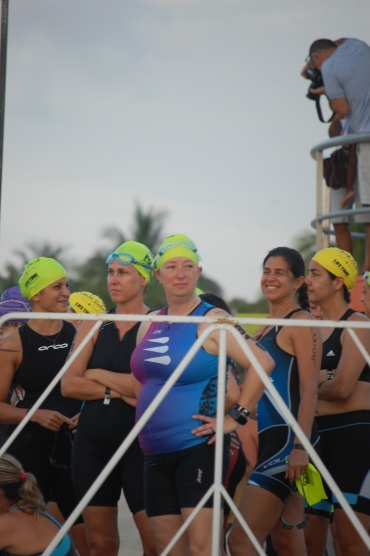 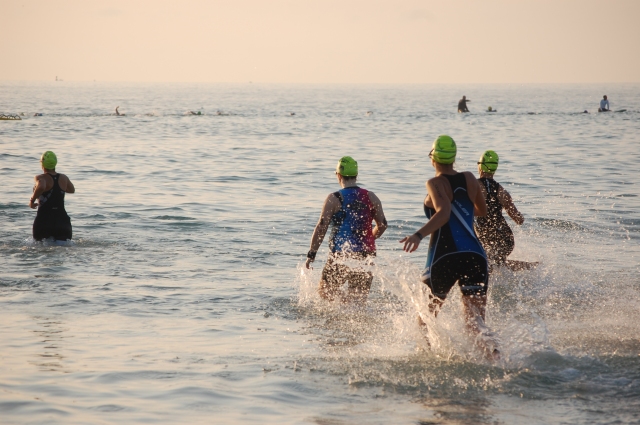 The bike had really gotten in my head. I was scared of the traffic, didn’t know how well it would be marked, big bridges… Luckily it was marked really well with tons of officers & volunteers. I had to talk to myself at one point though. It was quite intimidating being among the Miami traffic. And by the end of the ride the heat was on!!

And the finish…the glorious finish! I knew I’d have some challenges to overcome when I signed up for this nearly 11 months ago. It was a BHAG – Big Hairy Audacious Goal for me. Your goals should scare you a little. This did, more than a little.  Thanks to everyone who has supported

me in all the many ways in this little journey I’m on…especially the Hubs. Love representing Velocity Sportswear out there! Great company & great support. This event will make most of the others feel small!! Except for that little Half Ironman swim coming up next on June 4th… That’s the next dragon I’m gonna’ slay.