The first time I did the Ramblin’ Rose Chapel Hill sprint tri was 2009….I had a almost-one year old. Last weekend I did it again and I had an almost-8 year old. It was the same course, the same everything… but so very different this time around.

I think the first several I did I put myself in a swim group of 4 (out of 10 with 10 being the best). Last year I think I was in a 6. At the beginning of this season I was a 7…..and that’s right, I ended my season in the swim group EIGHT! Two people passed me in the pool right at the beginning. But that was it! I hung with the pack and held it together in the “8” group. Eight out of ten. Last summer I couldn’t even believe it when I was able to swim freestyle the whole 250 without retreating to breaststroke. It was a small miracle! This summer I didn’t even consider doing that. I knew I could do much more than 250 freestyle, a lot more. 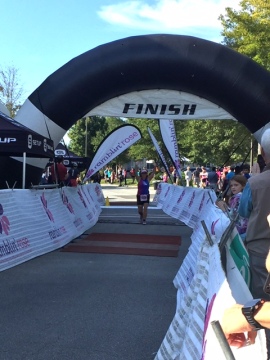 I’ve never had to use the portapotty during an event, but I guess there’s a first time for everything! It was a great season being part of the TriMafia ambassador team with Velocity Sportswear. I always got comments on my kit and how it was easy to see and just a lot of fun. It’s super comfortable, made by Epix. Great stuff!! 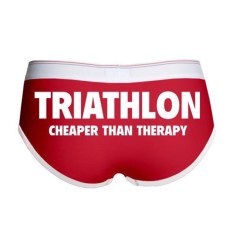 I’ve already got 4 events paid for and on my schedule for 2017. One involves a 1.2 mile swim leg on a team, one is an ocean swim in South Beach, FL and a sound swim in the OBX, and one is a sprint event I’ll do for the 4th time. I’m sure I’ll have a few more thrown in too. I need undies that say Triathlon IS Therapy…true in about a billion different ways. I’m sad the season is over but looking forward to next year!!