For me, this was my best race! EVER! I was the most comfortable in my skin, had the most fun, and actually passed people on the swim and the bike….that never happens!! It started a little rocky not knowing if the water would need a wetsuit or not (it was 81 degrees, so glad I didn’t need it even though this race was why I bought it and trained for it earlier in the year).

Sunrise! The day after

There were also two jelly fish at the swim start line when I went to packet pickup the day prior. So the two big fears – the wetsuit and the things that lurk beneath the water – were staring right at me with the day prior. But, I knew I was swimming in the morning whether there was chop, fish, seaweed, or whatever. I did hear after the fact that a few people got stung, but I was able to escape the swim without any problems. And it was hot. REALLY hot this weekend. Much hotter than it had been in Raleigh lately. I forgot how humid it is there! 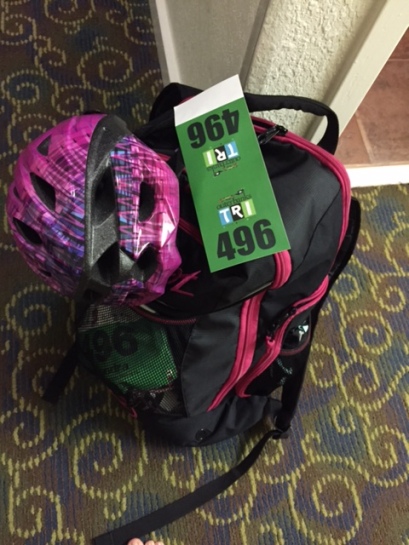 JELLY FISH – about a foot long!

Swim start is right behind me.

The race started with a great open water lesson: always use the safety pins that they give you with your timing chip. Luckily I went into the water to warm up – kicked twice and the damn thing fell off!! I flipped out, almost fell apart …someone said that it floats. It did. I got it, ran up to Jason and told him to get some safety pins. While he did I warmed up and didn’t even finish before the National Anthem was playing. Very short warm up time! Got my pins, made sure it was secure, then it was time!

It’s hard to find me but I’m under the red/orange ball, just to the left. My Velocity kit is blue on the left side & pink on the right. My plan was to be in the back and on the side. I was nowhere close to the back OR the side which I realized during the 10-9-8 countdown. CRAP. If you look in the distance you can see the people in the previous wave swimming around the first yellow marker. I did have a minor freakout as I went past that first yellow marker…the second one was waaaaaaaaaaay over there and I got a little panicky. But I stopped in the water, had a little talk with myself (you know how to swim, pretend you’re in the pool, breathe on both sides b/c you’re wasting too much energy…) and then I was good. I even passed people on the swim! I even passed a couple of people from the previous wave. I’ve been those people before…I know it doesn’t feel good to be that person, but it sure felt good to be ME that day!

As I got out of the water, there was a literal double rainbow as I came out!! How cool! On the bike I was able to hold about 19mph but coming back on the bridge I was holding about 13.5mph. The wind was noticeable but not impossible. The ride was gorgeous and I passed people on that too!!

The run……well, it was crappy. About half way through I got goosebumps – not a good sign. I was at an aid station so I poured cold water on myself and got gatorade. That got me through the rest. The finish was awesome!! They had a hose spraying cold water at the end, great food, and even though I don’t like beer I had one – and it was awesome!

I worked for this banana!
It was a great birthday celebration. Doing this race right after my 44th birthday was a great gift. The weather was perfect, being away for a couple of days does good things for my soul. I’m starting to see real progress and growth, which is really awesome. My hubs is the best – in addition to being my “sherpa” for every event I do, he supports me with tri jewelry. =) 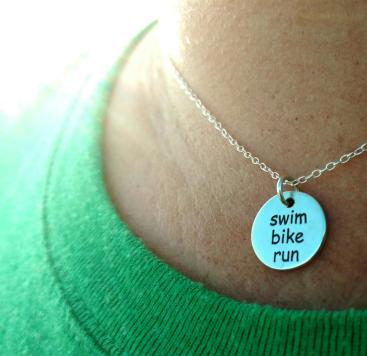