Last weekend I finished a 50K ride. It’s only about 32 miles, which isn’t super long. However, when it’s really hot and when the ride last year sucked the life out of me I was ready to redeem myself.

Last year, 2015: I signed up to do a 50K ride that supports fallen officers, called the 5-0 Ride. They offer a 50k and also 100k versions of the ride. Last year it was about 100 degrees, crazy hot at the end, and I did a lot of stupid things during that ride. First, I didn’t stop at the first rest area because I felt great!! Really stupid. I also didn’t drink/eat enough along the way at the next two stops. The last mile or so is all uphill. Very close to the end, I got off my bike and had a temper tantrum….I was miserable, felt like a failure, hurting, and also determined to get back on the F bike and finish. By the time it ended I had some form of heat exhaustion and was dumb as hell. Riding 32 miles wasn’t that massive of an undertaking for me, but I made some stupid choices last year. I should have known better!! 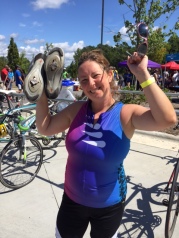 This year! 2016: Immediately after the ’15 fiasco, I knew I would sign up again & do better. I’d eat better, drink more, be better prepared, stop & stretch, take my time, etc. And this year was muuuuuuch better! I stopped at each rest area, drank a lot, stretched, ate some pickles… It was really good! It was hot but not stupid-hot like last year. And the best part is that I didn’t get off my bike at the end. I rode by that exact place where I fell apart last year and kept going! I finished and it was great! I knew I couldn’t/wouldn’t have two of the same events with the same problems.

I’m already set to do it in 2017 and I hope to be better on the hills next year. #2017goals  It was a great event and I’m ready to do it again! I think there’s something about screwing up and then redeeming yourself that’s good for the soul. That green tank top above is from Velocity Sportswear – figured it was appropriate here! “Love – just a ride away!”