I had a really rough 24 hours this weekend. A roller coaster of awesome, loss, pain, embarrassment, love, life lessons, parenting Olympics, and resilience.

On Sunday morning I rode about 13 or 14 miles with my coworker Steve who is doing a team tri with me this coming week (so exactly one week out from said event). I’m swimming, he’s biking with a brand new road bike, and I’m running. Team Tri Beer! I don’t like beer but that doesn’t matter. The greenway has many bridges. Those bridges are wood, and when they are wet, are slick. I hit a slick spot, landed hard on my hip, had bruises – he was slightly ahead of me & didn’t notice, he went on further. I was mildly bruised, embarrassed, pissed, but I got back up and got back on. The bike took a small hit but nothing huge. The handlebars were wonky but not so bad I couldn’t ride. 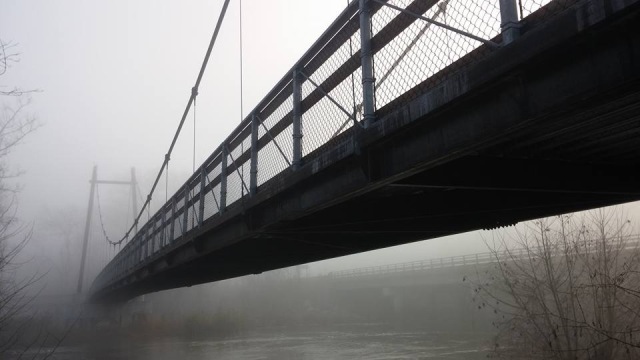 However, as we caught back up I was able to continue but soon realized something wasn’t right. Luckily we were just over a mile out to the car when I realized my tire had just gone totally flat. Crap. Had to do the walk of shame in click-clack bike shoes. My hip was hurting but not so bad I couldn’t walk. A little blood but I’m ok. And this was his first ride with his new bike. Damn… I was lucky I didn’t hit my head or do worse damage. I know, I need to learn how to fix these tire problems.

I had planned on riding Monday afternoon with my husband – made plans for the kids, etc. There are some beautiful sunflower fields that we missed last year and I really wanted to see them this year. I left that morning with the boys for a bit and when I came back he said that Libby (17 year old dog) wasn’t doing good. I quickly realized that today was the day that I had been dreading for quite some time. This was it. It was 4th of July so we had to go to an emergency vet -they were so nice and so gracious. I was literally a sobbing mess. 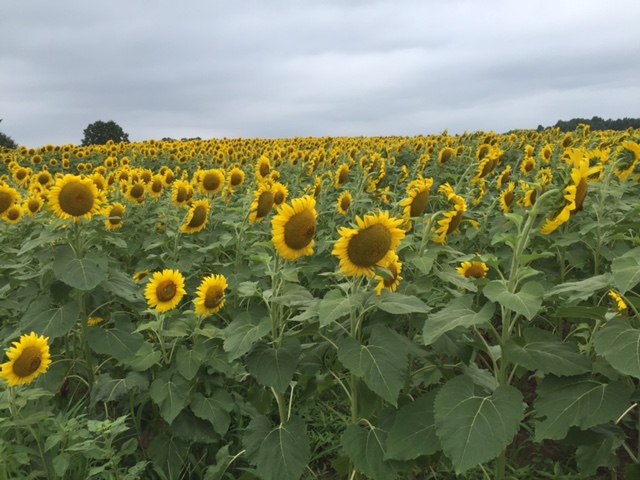 Losing my friend is hard enough, but having to explain death and “what happens” to a 5 & 7 year old is beyond complicated, painful, and confusing. My oldest cried a little bit. My youngest asked about getting another one. We still have our dog Tina, who is a lab mix at 13 years old….so yes, I know what’s coming there too. We had a lot of talks in the past day about life. One was about money. My youngest said something about having a ton of money & using it for stuff. I told him that money can buy a lot of things and can fix some problems, but even if I had a million/zillion/billion dollars it still wouldn’t bring Libby back to me. Lotsa’ life lessons and heavy parenting this weekend.

Even though our day took a turn yesterday, I decided we should still ride. Maybe not the full length we had planned but definitely still go. I figured I could be sad at home or I could be less sad on my bike checking out the sunflowers. We did about 15 miles, which was great. The few hills we encountered I did them with ease. The bridges (mostly dry now) were a little scary  – there were about 30! Maybe not that many, but a lot. So it was like immersion therapy. Get back on the bike within 24 hours after a crash and ride over as many bridges as possible while as sad as possible and with a sore hip. Enjoy the beautiful sunflowers and try to smile a little for the pics even with puffy and almost closed eyes. It was one of my favorite rides with my husband ever. I’m so glad I rode through the sadness. 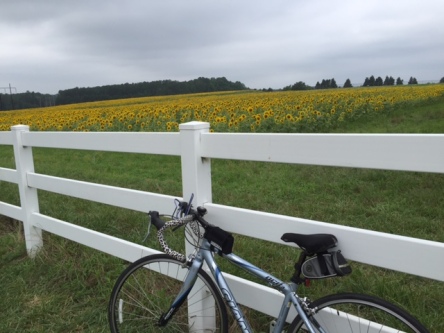 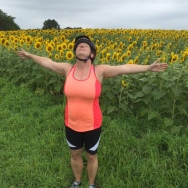 Today, Tuesday, it was back to the new normal of life without my friend. I couldn’t stop crying this morning. I went to the office for a little bit to take care of a few things, but there was no way I could be surrounded by people, be nice all day, answer the phone without sobbing, etc. I just couldn’t stop crying. I knew I couldn’t be there for long so I took my pool clothes with me hoping I would make it there and not go back home to sleep away the sadness. I’m glad I did go swim. It was therapeutic and soooo much more than I could have thought. I swam 2 miles!!! The people in the lanes on either side could not keep up with me. People came & went in those lanes. I was there for about 1 hr and 15 minutes. With 5 laps of breaststroke, an hour of freestyle, and a few more laps of cool down I could not be stopped. One guy next to me kept trying to race me and he picked the wrong day to do that. I smoked him over & over & over. I could tell he was trying hard, but could only do 1 or 2 laps at a time without stopping for a good amount of time at the wall. He came & went. He gave up. Another guy took his place, an older man who was mainly walking the lane. He kept staring at me like WTF? Another guy on the other side….after a while at the wall we made eye contact and we both chuckled a bit and I kept on going. I did my best to leave a lot of pain in the pool. It was the best swim I’ve ever had, the longest I’ve ever gone, and the most soul cleansing as well. 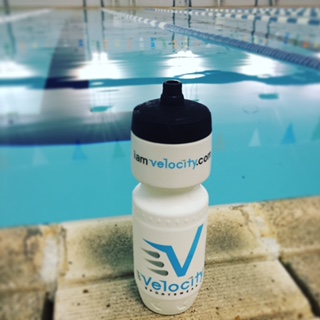 Sometimes life throws a lot at you all at once. As profoundly sad as I have been, I’ve also been profoundly grateful to have triathlon in my life. I don’t think I would have done the ride & swim had I not already had it on my radar as a priority for training. In the past, heavy life events made me sleep, not expend energy. And that would lead to a lot of heavy & dark days. I hope this biking & swimming will help me be more resilient and remember and the beauty and goodness in her a little easier. Libby was a beautiful friend and I will miss her more than I could ever describe. She was way more than “just a dog”…. 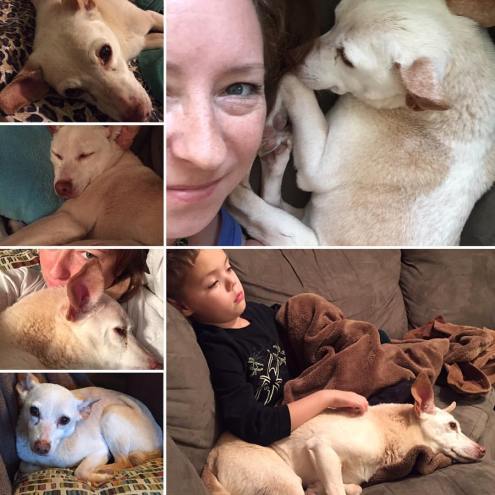