I have some mixed feelings about this race. I wanted (hoped? expected?) a great race – this was the third time I’ve done this one and I’ve been really focused on improving my swim. What I got was a great swim and a finish….just a finish, not a PR. I went into it thinking I was more prepared than I was. As I’m writing this I haven’t even looked at my official time because I know it’s not what I want. Eventually I will check it out. I was glad to sport my Velocity gear, TriMafia style! 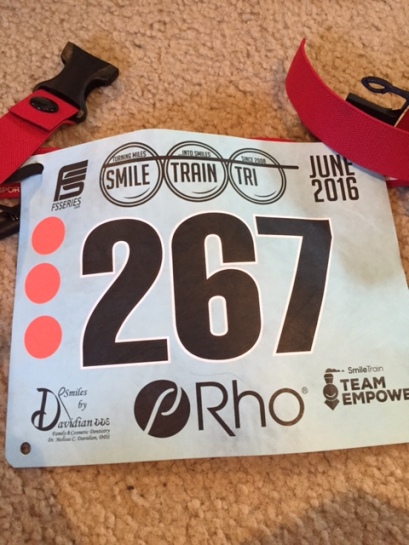 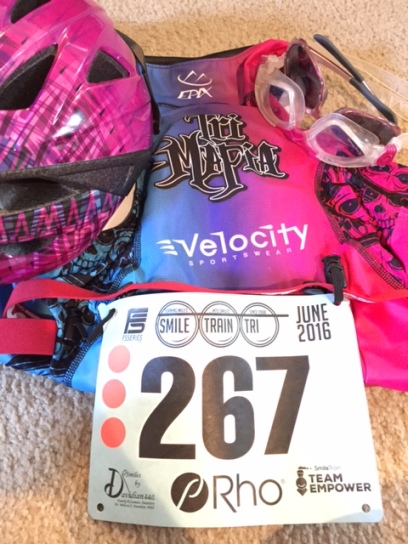 It wasn’t an awful race by any stretch! The weather was perfect, the venue was awesome, the volunteers were great (except for that one smart ass kid, being a kid), the bling was super cute, and the course was the same as previous years. I think it was me….having different expectations, wanting a PR, wanting my 5 am sacrifices to the exercise gods to show progress, wanting to see improvement, comparing my previous self to my new-and-improved self. I set some expectations for myself that I couldn’t meet. Whether they were realistic or not I’m not totally sure, but I didn’t hit the target on this one. 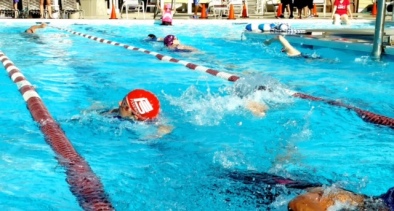 The best part of this race is that I realized how much more comfortable I am in the swim portion. Wall-to-wall, I did the swim in 5:47 in a pool with crowded lanes, people to maneuver around, and with someone on my tail who really tried to pass me (but didn’t!). I was such a bad swimmer when I started this that to even consider doing a swim in under 6 minutes was literally unattainable and unthinkable. Now my goal is to push towards a 5:30 swim AND eventually do flip turns. Me! doing flip turns! Whaaaaaaat!? Not now, but I know I can actually work towards that as a goal. I never would have thought that!

Rock-paper-scissors and triathlon… My husband made a great point yesterday in comparing tri to rock-paper-scissors. With RPS, there is only one winner of the three choices. You can’t hold all 3 choices together at once. You can’t make all 3 the winner at the same time. One will win over the other two. Always. My tri journey seems to be a little like that right now. My swimming is improving but the others aren’t. It makes sense why that’s true – because I’m not putting as much time into the others! If I wanna’ get better at something I have to do it more, there’s no other way to make that happen – not at the gym, not anywhere else, not doing anything else.

One of the things that I can’t seem to get through is the mental part. Swimming over 45 minutes makes me bored. Walking or running over an hour makes me bored. Biking….makes me bored. When I’m bored I start focusing on sore muscles and things that are annoying me. I need a better way to distract myself. Recently I watched the documentary about Lance Armstrong on Netflix. On the bike yesterday I kept thinking about that and how maybe I really DO need some performance enhancing drugs! Not real “drugs”, but just better nutrition, better gels, better caffeinated juices, etc. I need to start experimenting with some of those things to see if they really can give me a boost and a little competitive edge out there.

This is a great sport. So many things to learn, so many highs, and definitely some lows. I have another in a couple of weeks, then I have a break and I’m going to work on cycling more and figuring out what’s up with my cycling pain. Hopefully I won’t forget how to swim!