Somewhere along the way last year, I decided that I wanted to do a sprint tri in open water. That meant 2 things for me: learn how to swim better and then purchase & learn how to swim in a wetsuit. Fast forward, I made a deal with myself that I would purchase one by the end of January 2016. I did. It was on order and arrived this past week. Here is how it went:

I knew it would be here Thursday so I was constantly checking the “tracker” and finding out where it was. Screenshot of said tracker below. I was watching. And waiting. Because this is big. It’s definitely the biggest mental purchase I’ve made in the past 8 years, and absolutely the biggest related to triathlon. So I was waiting. And watching.

I went to pick up my son at daycare, then came home & saw it had been delivered. But where?! It’s not at my front door. My garage happened to be open, but it wasn’t in there. I checked again because I probably overlooked it. Nope. I look across the street and my neighbor has a package on their front door – BINGO! It’s over there. So, in the rain, I run over there but it’s for HIM, not for me! crap. It must be at the other neighbor’s….and then the other neighbor’s…. Nope. Nope. Surely it’s in a box and won’t fit in the mailbox but before I call someone & get all crazy I should check that first. And there it was, all stuffed in the mailbox. (!!!!) How did it even fit in there?? Anyway, it’s here, woohoo! And crap, it’s here! Standing in the rain with the prick of tears in my eyes, I bring it inside. And look at it – the package, not the actual suit. Just the white package. 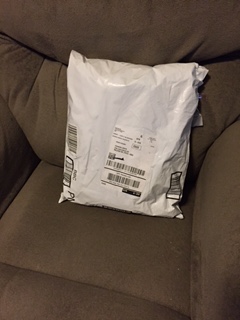 I’m pretty sure the boys found some meth to get into because they were completely INSANE this night, so there was no way I could deal with this for a few hours. But, after an hour or so I did take it out of the bag & look at it. And I thought, FUCK, how am I going to squeeze all of this into that??  This defies the laws of volume, gravity, mass, physics, and basically any other scientific concept. Square peg, round hole… but again, this will have to wait until the kids come down off their binge & I have some time to process this whole thing.

In the meantime part of the family chaos involved a half dead bunny due to our dogs, so my husband left to take the bunny to some animal sanctuary. I’m not even kidding. While he’s away I figure I’d try to get into it. I finally get the time & the nerve to put it on. It’s only been a few hours since it arrived but it felt like a very long time.

If you’ve never tried to put on a wetsuit, let me try to describe the process. I held it up in front of me and the width of the suit was significantly smaller than the width of me. Then you add a busty chest and um, yeah, that’s just not going to fit. But before I decide I need to order an even bigger size, let me at least try to put my legs in it. Luckily I got some advice from a local tri store – use plastic bags over your feet to help slide into the legs. And really, without that advice I probably would have given up. At least I got my legs in without a significant problem. But the hips. And the zipper in this thing should be longer and go down a leg rather than just stop in the small of your back. God bless the Orca people for making larger suits but hips don’t lie! Shakira said so! If you can’t get past that part, then there’s no way the rest is going on. I started pulling, and yanking, and cussin’, and wiggling, and finally got it past the hips. But then the rest is so tight too, it was almost impossible to get the arms through the holes. I was able to grab the zipper pull and I got it half way, and thought if this gets tighter I might die from suffocation…and there are no other adults in this house. Fantastic. This is how it’s all gonna’ end. I better take some pics.

So, the zipper gets stuck on something somehow. I can’t get it up further, and now I also can’t get it down either. So do I sit, stand, or what while I wait for help to show up?  I decide to sit in the recliner so that I can lay back & maybe that will make me feel less like I’m going to die. Well, I have my phone so I’ll take some pics… Holy frick this thing is tight. And the neck. Is it supposed to strangle me? I don’t know, this can’t be right. But I’m in it. I don’t think I’ve ever had a genuine panic attack before but I really did feel panicky in it for a few minutes & had to talk myself off the ledge. 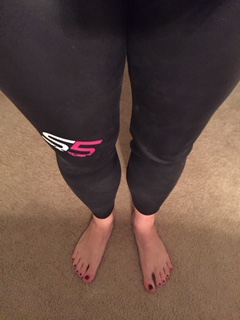 Eventually husband comes home, I hear the garage, get up and go to the door so that when he opens it – there I am. Standing in a wetsuit. Like…ta daaaaaaaaah! I did it! I’m in a wetsuit! It’s like a magic trick! His response was: “oh”. …….Really? that’s all I get huh? Sigh… well, ok, can you zip me up? Eye roll. And then later – can you help me get out of this thing??

So the bottom line is that I’m excited about this and what it means for me. This Orca suit represents something I never EVAAAAAAH thought I could do or would ever want to do. It’s like my “Everest” as people say. It’s easy to let other others poke a hole & deflate your excitement, but it’s not their journey or what they feel pushed to do. My mom’s reaction was about the same when I told her I ordered one – “oh.”

BUT – here I am, in all my glory, sharing these pics with you – whoever is reading this – because I’m in badass training and I’m excited to see where this goes. The next steps are to get into the pool & swim in it, get into Falls Lake in the summer, and then the beach. The swim I’m using this for is in salt water, the OBX sound side. The collage below is on Instagram. 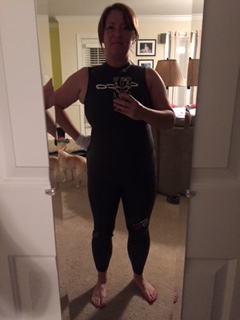 3 thoughts on “I am one with ORCA”