Well, I did triathlon number 2. However, I did it as a team with Jason because after driving the course, I knew I wasn’t prepared to do the extremely hilly bike ride. The downhill was awesome!! But, the climb was too much for me. So, luckily Jason said he’d do the bike… I could start with the swim & finish with the run.

So, that’s what we did. This is a pic of us after the finish and also one of me in the pool before the start. I ran most of it, which was a really big deal for me. And, I felt ok on the swim – like I wasn’t going to die, so that was nice. 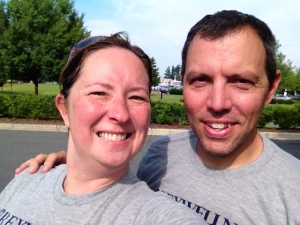